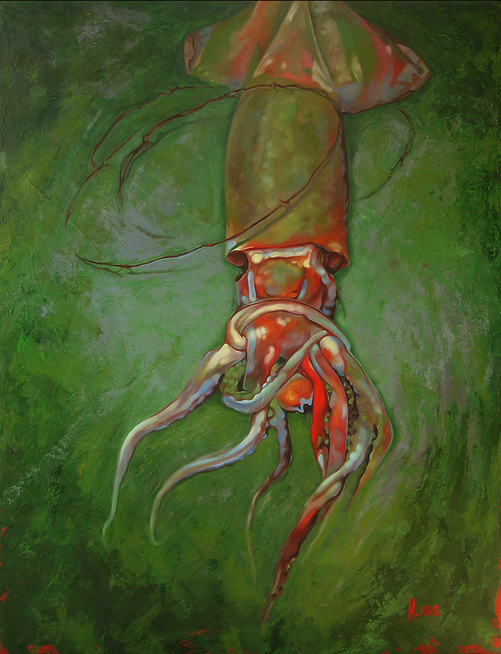 Some months ago, we watched a television documentary about a little-known and even less-understood creature called the Humboldt squid. In Spanish, it is called “diablo rojo” ... red devil.

According to the documentary, the squid prefers an oxygen-poor environment. So, as the planet warms, the diablo rojo’s range is expanding; it is not just surviving, but thriving. Estimated to exist in the millions, Humboldts are voracious, intelligent pack hunters that have been known to attack human divers. It is thought that the squid communicate with one another by passing electrical pulses through their unique skin cells, creating luminous colour changes. But study is difficult, as scientists have yet to keep one alive for more that a few days in captivity.

Our family arrived in early August 2009 for our annual holiday on South Chesterman Beach near Tofino, BC, on the very day that some 300 diablo rojo washed up dead right along that stretch. With them were hundreds of dead local herring and El Niño mackerel. The mackerel I’ve seen before. They come north, following the warm currents that happen from time to time, and their speed makes them a threat to slower herring and juvenile salmon. The Humboldt, though, are a new twist. Powerful and fast, with excellent vision, they are more than a match for local species.

This painting is life size; it was juvenile squid that we found on the beach. When fully grown, the Humboldt can reach six feet in length and weigh more than 100 pounds. . It was a rare coincidence that we visited just when the squid washed ashore; humans who are not involved in marine science (thankfully) don’t often meet up with diablo rojo, and certainly not in numbers. I can’t help but think that we have had a hand in creating that particular intersection. And our hand has been heavy. The results are stark, like the rusted barbed wire around a creature that normally swims deep and free, shimmering with light.
Mark Heine