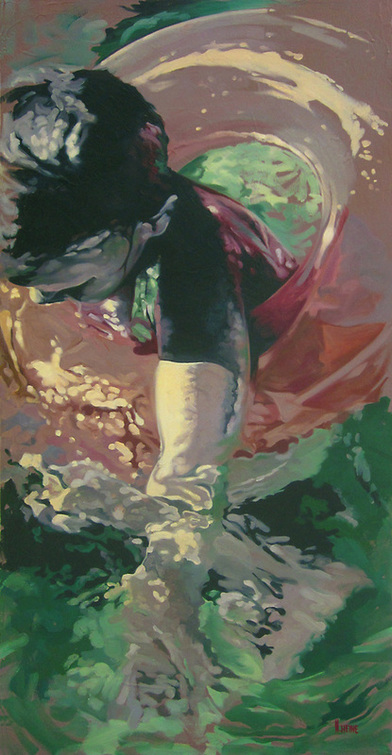 Available from the studio
​For information ...
Contact us
​
Ashley is five years old. She’s all played out and just floating.

Ashley and her twin sister Lauren belong to our friends and neighbours, Paul and Carla. The girls are over to partake in our backyard paddle pool. They have a pool of their own back at their house, but they don’t have a Sarah. Sarah is my 13-year-old daughter. She’s the big girl they love to play with. Besides, I come with her as a bonus play package.

Paul is at home, across the road, trimming the front hedge – unsuspecting. On this side of the road, we all decide that it’s time for a water war. “Operation Soak Dad” is launched. We’ve prepared a water-balloon cannon, comprised of surgical tubing and the top of a large plastic pop bottle. It works like an enormous slingshot. We’ve also filled a garden trug with water balloons. We creep into the front yard and up into the back of our ‘war wagon’ pickup truck, under the cover of the noise of the hedge trimmer. With a child holding each end of the sling, we unleash our sniper attack, lobbing water bombs across the road. It takes a while, but eventually Paul comes to realize that he’s under attack ... and the battle is on.

Hoses, water pistols, buckets, water bombs ...  all are fair in this engagement. At one point, even Barbie, the twins’ favourite doll, is taken hostage and threatened with a hosing. It takes a brave, commando-style flank attack to achieve her release.

In the end, none are left dry. Not even the grandparents, who are watching from what they believed was the safety of their front porch.

When it’s over, little trace remains of the monumental struggle ...  just the shards of intensely coloured balloon shrapnel, waving like poppies over the site that was ... the “Great Water Battle of 2011.”   Mark Heine