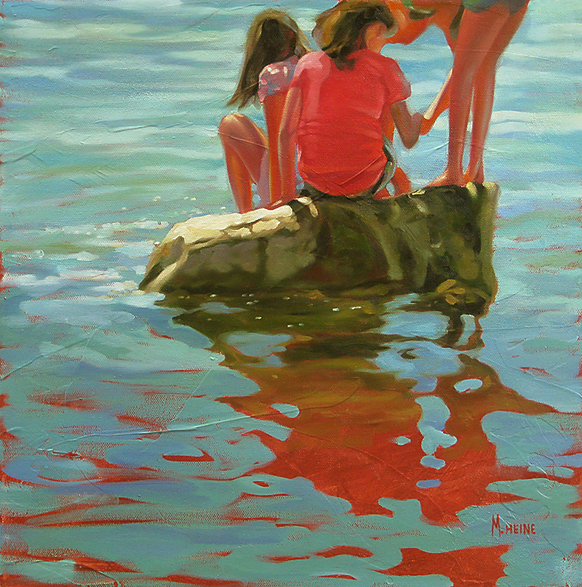 My youngest daughter Sarah and her two friends Jasmine and Mia are spending a hot summer afternoon hunting for treasures on the shore of Clover Point in Victoria, B.C. It’s early August 2008, the apex of the summer break, when the thought of the last school year is faded and the next is too distant for concern. It’s a very special time of the year and it was my favourite, when I was that young. The only worry is how to fill all that time with fun.

When I was between my 4th and 5th years in school, we lived in Nanoose Bay, just north of Nanaimo on Vancouver Island. The pinnacle of that summer was finding four old inner tubes, and together with my friend Stanley Kemp, spending weeks designing, building and painting two kayak-style rafts. Mine was red, I recall, and his was blue. We painted names on them, too. Its a bit foggy, but “Blue Thunder” comes to mind.

We eventually convinced my mother to let us to wedge them and our home-made paddles into the back of her station wagon. She then drove us to Rathtrevor Beach, where we spent a great afternoon paddling in the shallow, warm water.

Our craft performed fairly well, despite some stability problems, which we were sure we could defeat with some design adjustments ... perhaps a bleach-bottle outrigger system. They were, beyond a doubt, the coolest things on the beach, since for us, this was still the time before girls.

Unfortunately, my mother had different plans. She refused to allow us to put the soggy, sand-encrusted rafts back in the car. We had spent untold hours on these things and they were, to that point, our greatest achievements. We couldn’t just leave them. Our protests fell on deaf ears, my mother maintaining that the fun was all in the building anyway. It was my first introduction to such a concept. I’m still not convinced.

I can still recall the view out the back window as we drove away. Our rafts were crawling with uninvited beach waifs. They were never seen again.
Mark Heine