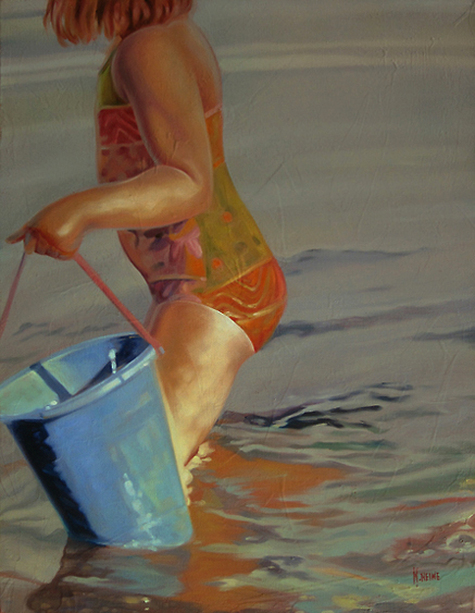 This is my youngest daughter Sarah, here age five. We’re camped in the Beaumont Marine Park on Pender Island, BC. She’s trolling the shallows, eager to outwit and capture something living to show off. It’s that ancient hunter-gather instinct.

Sarah is now 12. Last summer (2010), we spent a week’s holiday at Chesterman Beach in Tofino. One day we walked out to tiny Frank Island, which is only accessible at low tide. The year before, we had collected tadpoles there and had great fun watching them turn into froglets for the week, before we eleased them. To Sarah’s great dismay, there were no tadpoles to be had this time. Her attention quickly turned to the tide pools. They teemed with tiny bullhead fish that looked very much like tadpoles – a new, but far more wily adversary.

My own bullhead baptism came when our family moved to a beach front cottage when I was eight. We had come from the Prairies, and my knowledge of beach fishing was sadly lacking. I spent many hours chasing bullheads around the base of a large boulder that appeared to have been left on our beach by a glacier in the last ice age. Time and tide had worn at the base, undercutting it and creating a large pool and plenty of shade from hungry sea-birds ... a bullhead paradise. For months I tried to catch them, but to no avail. Eventually, I realized that I had to outwit instead of outrun. I placed my bucket on its side in a narrow channel between the rocks and bedded some sand on the bottom. Then, starting at the other side of the rock, I herded them toward my bucket ... my own little buffalo jump. The bullhead stampede worked. They streamed into my bucket and hid there in the shade. All I had to do was turn it upright.

I passed that skill to Sarah, on that afternoon in Tofino, akin to the great passing of knowledge by our forefathers. It wasn’t long before she had a bucket of bullheads to admire. Later that night, we gathered around the great council beach fire and recounted the day’s conquest.   Mark Heine