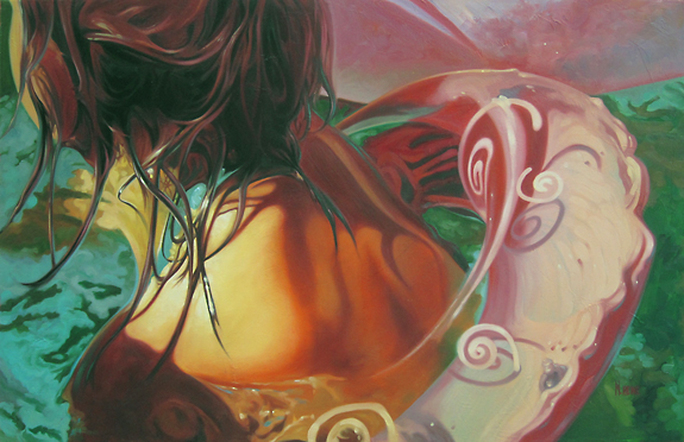 Available from the studio
​For information ...
Contact us
​
This is Lauren, age four here, in the summer of 2010. She’s one of a set of twins belonging to our friends Paul and Carla. We’re all taking part in one of our numerous summer backyard aqua-parties.

I can’t imagine another situation more saturated with colour. Pinks, blues, reds, greens ... the colours of the rainbow. All offered on toys, towels and swimsuits, in the most intense hues their Chinese manufacturers can attain.

I was in China in 1988, in Tiananmen Square a year to the day before the student protests. We were on a cultural exchange/painting tour, where we met with Chinese university art professors. It was interesting to demonstrate and compare, with the help of Simon, our excellent student guide/interpreter, who was always watching out for us.

Two months later, I returned to Canada. I did feel some culture shock, but not the kind I had expected. It was the vivid green intensity of the grass surrounding the Vancouver Airport ... I was suffering form colour withdrawal.

Simon, our guide, became a friend to some of those who had gone with us, and they kept in contact. One had arranged, with great difficulty, to get him a visa to visit Canada. We flew him in for the gala opening of the art show that was inspired by that trip.

He was in Tiananmen Square for the protest – a natural, due to his skill in English, which was rare for the time. I never heard from him again. Years later, a rumour surfaced that Simon had been released from prison, but I don’t know for sure.

That was 23 years ago. I’m sure that things have changed. But based on my experience, it seems ironic to see all of that summer colour, coming from China.   Mark Heine