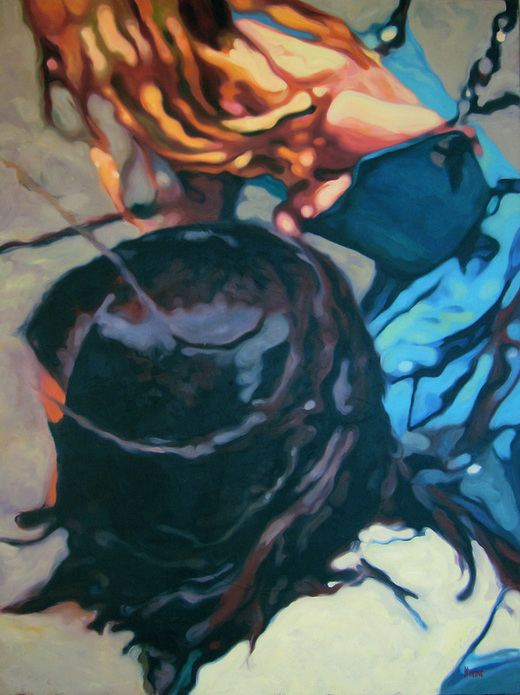 I’m a little surprised that the traditional swing is still permitted in the modern (litigation-enriched) play park. In my time as a youth, and then as a father, I’ve seen more casualties come from it than from any other piece of play equipment. Nothing serious – just bruises and tears, but plenty of them. It’s the last, truly versatile thrill ide allowed. Teeter-totters, slides, monkey bars, etc. are fun (yawn), but none can provide the that same edge-of-gravity, stomach-in-the-throat sensation.

Sarah, my youngest daughter, here age nine, and her friend Jasmine, also nine, demonstrate Downward Facing Dog technique, with the added complexity of partner synchronization. I give it an 8.5 for degree of difficulty and a 9 for artistic expression, mainly due to Sarah’s turquoise dress. Other favourite techniques include Spinning Corkscrew, Standing Kamikaze, Kneeling Face Plant, and Sideways Pendulum, which requires the neighbourly co-operation of others, to avoid collision. Each has a varying degree of difficulty and consequential park-cred rating assigned to it.

As far as propulsion goes, The Push is highly desirable, and is most children’s first taste of the management lifestyle, in which an employee does all the work and gets little reward. For that reason, you don’t often see kids pushing each other. That’s left to the parents, who are numb to servitude. The exception to that rule is The Under-Duck, in which the pusher, ona-counta-three, will pass through and under the rider, taking care to quickly vacate the path before the returning downswing. This is considered fun for both the victim and that assailant.

The swing is also the only equipment that most adults still attempt. And if they do, they typically shy away from the more exotic riding styles, opting instead for the more-dignified, but less-inspired Seated Pike – unfortunately not favoured by the judges, due to a low degree of difficulty and limited creativity. However, it still may be worth a park-cred point or two, depending on age bracket. Mark Heine