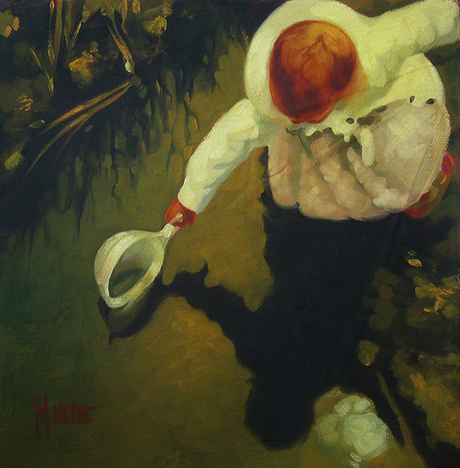 SWEETWATER TREACHERIES is set for release in 2010. Ms. Stronin has been recently nominated for both the 2010 Pulitzer Prize and a Puschart award, for her new works. Congratulations Lynn!

This is Ashley, age three, on Frank Island, just off Chesterman Beach, near Tofino, BC. Using our kitchen strainer, we collect something like 50 tadpoles for our jar. The kids are enthralled, and we spend the week watching them sprout legs and turn into little froglets.

With Sarah and Charlotte, my daughters, ages 11 and 14, we returned the collection back to its home pond before we left, with the exception of the four that were deemed pets. As adults, we were quite torn. It was most humane to release all of the tadpoles. But it’s not every day the girls have a chance to see life in the wild up close – so close that they could watch a tiny black slip of a swimmer transform into the mighty miniature frog that could scale the inside of a water bottle. They adored them and wanted to take care of them.

I told Sarah I’d heard that frogs are difficult to raise in captivity ... trying to prepare her for the inevitable. She went online and did some research about habitat and feeding. It was educational. But unfortunately, in just a few days, all of the frogs died (we think ... one escaped). Sarah and I took them to our local creek and ‘buried them at sea’, reasoning that their bodies would contribute, in some small way, to the lifecycle of the creek. It also seemed, spiritually, the right thing to do. We both gave a small blessing as they were carried away by the current. I imagined “Taps” playing, faintly, somewhere off in the distance.

I did some research, too. I learned that, all over the world, frogs are disappearing. An incurable skin fungus, chytrid, is killing them everywhere. Many are now endangered or extinct. Scientists and aquariums are busy rushing around like Noah, collecting them two by two. Scientists say that there is reason for hope, but this is another reminder of how delicate the balance is. And, as much as we still feel guilty about taking those four away, we’re grateful that the kids had that opportunity to observe the wild tadpole in its natural habitat. I wonder if it might be their last.   Mark Heine