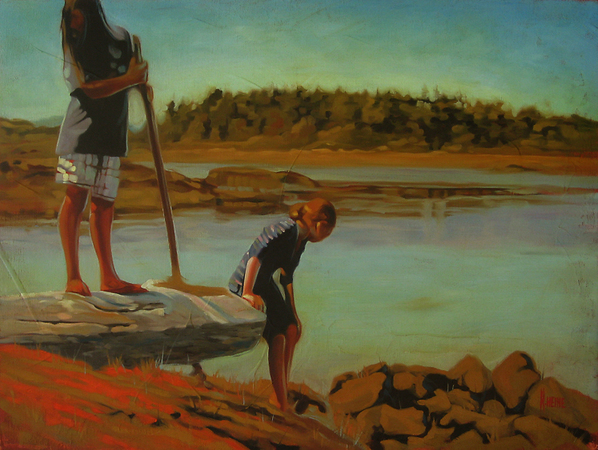 On Canada Day 2009, I toured the boat works of the Cannery Museum in Steveston, BC. I was thrilled to find the boat Fleetwood on display, hauled out on the marine ways. When I was 14, I had some good times on that old 50 footer. In the mid 1970s, my friend Fred Perron’s father was running a charter business with it, out of Deep Bay on Vancouver Island.

This was a purpose-built rum-runner, equipped with twin war-surplus 12-cylinder aircraft engines. Far too fast for the coast guard of the day to catch. They did manage a canon round through her bow, though, and quite a good number of machine-gun rounds through the cabin. I saw the patches ... too cool.

Seeing the Fleetwood again rekindled my interest. Years ago, my partner Lisa did the proofreading on a book about rum-running, so she dug out her copy of the printed book. It was written by a local Victorian, Johnny Schnarr, who ran liquor into the U.S. from Victoria during Prohibition. Schnarr mentions Discovery Island, a small, uninhabited island off Oak Bay’ municipality, that the rum-runners used as a clandestine night-drop for the illegal booze. By day, he ran the dock facilities of the Empress Hotel.

None of the boats in his story was the Fleetwood, but the book has certainly given me an idea of what it must have been like for the Fleetwood in its prime.

On a recent picnic to the island with my daughter Sarah (right) and her friends Christina and Niamh (left), all age 10 or 11, we came across a hidden landing site in a small cove. It had obviously been hand-cleared of rocks to allow for the deep draft of a displacement hull. It was also marked with a pole, which Niahm is holding, stuck through a hole in a log. The location, the history, and the age of the girls brought to mind the adolescent novels of Enid Blyton, the Hardy Boys and Nancy Drew. For hours, we hunted, explored and made every effort to unearth ... ‘The Secret of Rum-Runner’s Cove’.   Mark Heine