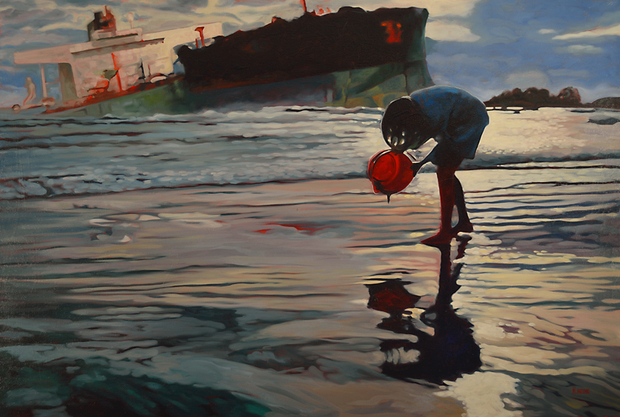 Original art is sold
​
This painting has evolved from a previous smaller study. I decided, for this larger painting to change the ship. This tanker is the actual Exxon Valdez... re-christened The Spirit Of Enbridge for this purpose. I know that it's bad luck to re-name a ship, but I think we're a tad beyond that consideration here. You might recall the Exxon Valdez... she ran aground in Prince William Sound, Alaska. She was 301 meters long, 50 meters wide, 26 meters depth and could transport up to 1.48 million barrels. The Valdez spill was estimated to be somewhere between 257,000 to 750,000 barrels of oil. She was a relatively new tanker at the time of the spill. Equipped with all the latest navigation technology. Who, in their right mind, could believe that this can not happen again?

While walking Chesterman Beach near Tofino, BC in the summer of 2012, I started thinking of the proposed Enbridge Gateway pipeline. The concept for this painting was born. The contrast of typical coastal scenic beauty and an uncomfortable thought. Its intent was to help people visualize a possible future for the west coast of Canada if Enbridge starts shipping oil, by tanker, from a pipeline in northern BC.

The evidence of global warming is clear, although many choose to ignore it. Despite that, the risk to the BC coast is no myth. Wave buoys in Hecate Strait, a notorious passage north of Vancouver Island, have recorded wave heights of more than 100 feet, based on government data collected for the pipeline study. These are the very waters that tankers would have to regularly negotiate. Despite technology, human error is always a variable that can’t be quantified. The Exxon Valdez is proof of that, as are the hundreds of ships that line the seabed of this coast.

Moving toward sustainable energy is clearly the direction we should be pursuing for the good of the planet and our children. However, the cost of sustainable energy infrastructure is always the perceived deterrent. The cost of this pipeline will be in the billions, not to mention the billions in expanding oil-sands development. Strange that the infrastructure for feeding the fossil-fuel machine and its lobby always seem to have a blank cheque.

With so much money invested in the development of the oil sands and it's infrastructure, it has become an uncontrollable juggernaut. Countries all over the world are lining up to get on board. It reminds me of the old joke... of a car full of businessmen, all arguing over who gets to sit in the front seat, as they race towards a cliff . Every dollar spent in the oil sands makes it harder to stop this greed driven frenzy. And boy, they are spending. So if you're like the majority of BC residence who oppose the pipeline, what do you do?

Canada is very young, in terms of western civilization, the region of Western Canada is even younger. History records, over and over,  the exploitation of such new regions by the greedy, who count on lax laws and mute, isolated locals. It doesn't stop until those locals get organized and unite in a common voice. That common voice, becomes a force that can push back.

I realized some time ago, that the painting I've been doing over the past 7 years, is focused on the theme of our identity. This body of about 140 paintings, is a showcase of life and living on the west coast of Canada. A viewpoint that hopefully contributes to us realizing our distinct identity. At the same time, exposing our landscape and culture to others around the world. In the words of FBI detective Clarice Starling, from the film, Silence of the Lambs..." if he sees her as a person, not just an object, it's harder to tear her up."

The people of British Columbia need to unite... and quickly. We need to bring together the small, special interest groups, who individually have no chance facing the piggies at the oil sands trough. Majority rules are what we are supposed to live by in a democratic society. We elect and pay representatives who are tasked to police the common good. But in this case, with all that money in play, political views of the common good are subject to influence. We need leadership to bring us all together?

A frog, put in hot water will quickly jump out. When put in cold water and heated slowly, it will happily sit and boil to death...   Mark Heine 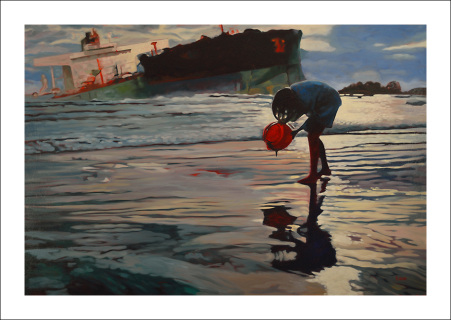