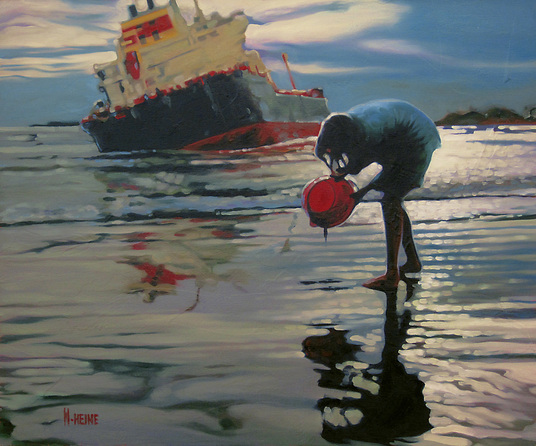 While walking Chesterman Beach near Tofino, BC in the summer of 2012, I started thinking of the proposed Enbridge Gateway pipeline. The concept for this painting was born. The contrast of typical coastal scenic beauty and an uncomfortable thought. Its intent was to help people visualize a possible future for the west coast of Canada if Enbridge starts shipping oil, by tanker, from a pipeline in northern BC.

The evidence of global warming is clear, although many choose to ignore it. Despite that, the risk to the BC coast is no myth. Wave buoys in Hecate Strait, a notorious passage north of Vancouver Island, have recorded wave heights of more than 100 feet, based on government data collected for the pipeline study. These are the very waters that tankers would have to regularly negotiate. Despite technology, human error is always a variable that can’t be quantified. The Exxon Valdez is proof of that, as are the hundreds of ships that line the seabed of this coast.

Moving toward sustainable energy is clearly the direction we should be pursuing. However, the cost of sustainable energy infrastructure is always the perceived deterrent. The cost of this pipeline will be in the billions, not to mention the billions in expanding oil-sands development. Strange that the infrastructure for feeding the fossil-fuel machine and its lobby always seem to have a blank cheque.

Safe oil supply is a critical and strategic issue for the United States. The U.S. presidential election is just three days away as I write this. Presidential candidate Mitt Romney has stated repeatedly that the cornerstone of his oil policy is pipeline oil from the north.

A frog put in hot water will jump out. When put in cold water and heated slowly, it will happily sit and boil to death. I’m feeling a bit green myself.
Mark Heine